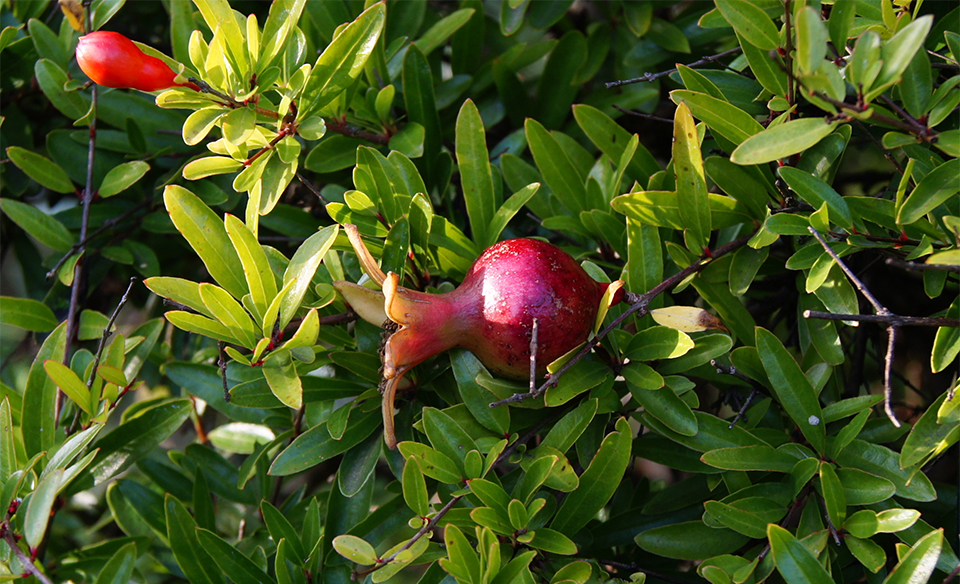 The fruit and juice contain pelletierene alkaloids, elligatannins (up to 25%), and triterpenoids. The alkaloids are highly toxic.

In 1500 BCE, the pharaoh Tuthmosis reputedly brought back pomegranate to Egypt from Asia. Prized as a fruit, it was also sought after as a remedy for worms. The Greek physician Dioscorides, in the 1st century CE, knew of the herb’s ability to expel worms, but this attribute was subsequently forgotten in Europe for nearly 1,800 years. In the early 19th century, after an Indian herbalist used pomegranate to cure an Englishman of tapeworms, English doctors in India became interested in pomegranate and its medicinal properties were investigated.

Until recently, the chief medicinal value of pomegranate was as a deworming agent, with the rind and bark being considered specific remedies for tapeworm infestation. Now, pomegranate juice is widely available and known for its positive effects on the heart and circulation.

Like other medicinal plants with a high anthocyanidin content, pomegranate fruit and juice have potent protective activity on all aspects of the circulation, supporting healthy circulation and countering local inflammatory activity, which damages the inner lining of the blood vessels. The juice is commonly taken to help with cardiovascular problems, including high blood pressure, capillary fragility, angina, and congestive heart failure. It also appears to help prevent dental plaque.

In recent years, there has been significant interest in the medicinal properties of pomegranate fruit and juice. As above, pomegranate has a strongly beneficial activity on the cardiovascular system, but it also appears to have an unusually wide range of potential therapeutic properties, including antibacterial, antiseptic, anti-inflammatory, and estrogenic activity.

James A. Duke, a former USDA botanist, has described it as an “anti-menopausal fruit.” Pomegranate shows signs of having anticancer activity and has been recommended as a preventative and treatment for prostate cancer. New potential uses are likely to emerge over time.

Do not use the rind or bark unless under professional supervision. This plant, and especially its bark extracts, is subject to legal restrictions in some countries.