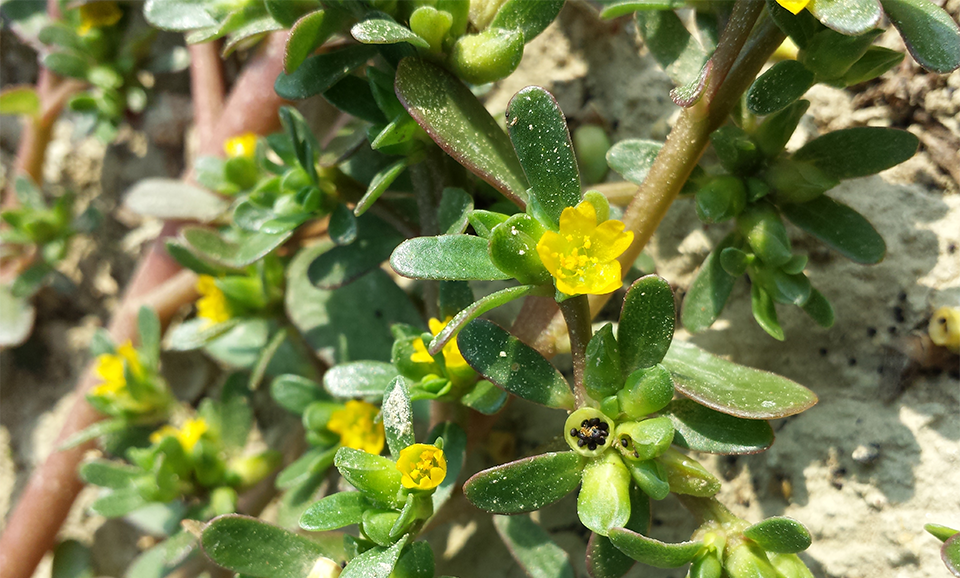 Native to Europe and Asia, purslane is now one of the most widely distributed plants, growing from Australia and China to the Americas. Often found growing near water, it is gathered throughout the summer. Wild purslane is the variety chiefly used as a medicine; the golden variety, P. oleracea var. sativa, is cultivated mostly as a kitchen potherb.

Purslane’s use as a medicinal herb in Europe, Iran, and India dates back at least 2,000 years, and it was probably eaten as a vegetable well before then. In ancient Rome, purslane was used to treat headaches, stomach ache and dysentery, intestinal worms, and lizard bite.

Purslane has long been considered valuable in the treatment of urinary and digestive problems. The diuretic effect of the juice makes it useful in the alleviation of bladder ailments, for example difficulty in passing urine. The plant’s mucilaginous properties also make it a soothing remedy for gastrointestinal problems such as dysentery and diarrhea.

In Chinese herbal medicine, purslane is employed for similar problems and, additionally, for appendicitis. The Chinese also use the plant as an antidote for wasp stings and snake bite. Used as an external wash, the juice or a decoction relieves skin ailments such as boils and carbuncles, and also helps to reduce fever.

Purslane is being intensively researched. Extracts of the herb show antioxidant, anti-inflammatory, analgesic, and anti-diabetic activity, underlining that fact that purslane is valuable as food and as medicine. The alkaloids have neuroprotective activity and inhibit acetylcholinesterase, making the herb theoretically of use in Alzheimer’s disease.

Do not take purslane as a medicine during pregnancy.