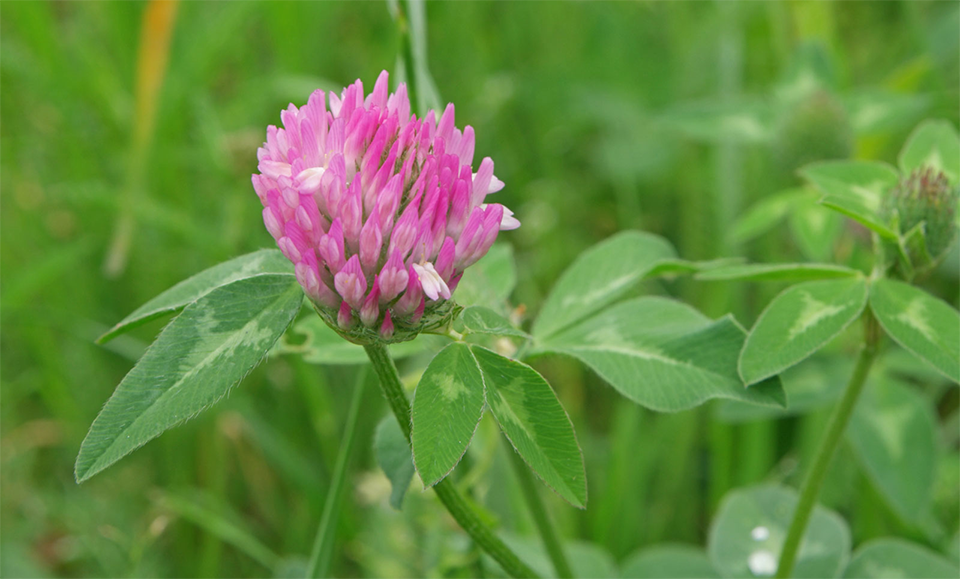 Perennial herb growing to 16 in (40 cm). Has a hairy upright stem, leaves with 3 (or, rarely, 4) oval leaflets with a white crescent marking, and pink to purple egg-shaped flowerheads.

Native to Europe and Asia, and naturalized in North America and Australia, red clover is widely cultivated for hay and as a nitrogen-fixing crop. The flowerheads are collected when newly opened in summer.

Red clover contains volatile oil, including benzyl alcohol and methyl salicylate, isoflavones, coumarins, and cyanogenic glycosides. The isoflavones occur at relatively high levels and are phytoestrogenic. The isolated isoflavones are marketed as a treatment for menopausal problems.

This herb has traditionally been used to treat breast cancer. A concentrated decoction was applied to the site of the tumor in order to encourage it to grow outward and clear the body.

Red clover is used to treat skin conditions, normally in combination with other purifying herbs such as burdock (Arctium lappa) and yellow dock (Rumex crispus). It is also expectorant and may be used for spasmodic coughs. Red clover’s significant phytoestrogenic activity has led to increasing use of the herb to relieve menopausal symptoms. In most cases it will be preferable to use extracts of red clover flowers rather than the isoflavones on their own.

Early-stage research points to the isoflavones countering bone loss, making them potentially of use in osteoporosis. Due to the isoflavones’ ability to “compete” with the body’s own estrogen, it is now thought that red clover may be helpful in both preventing and treating breast cancer.