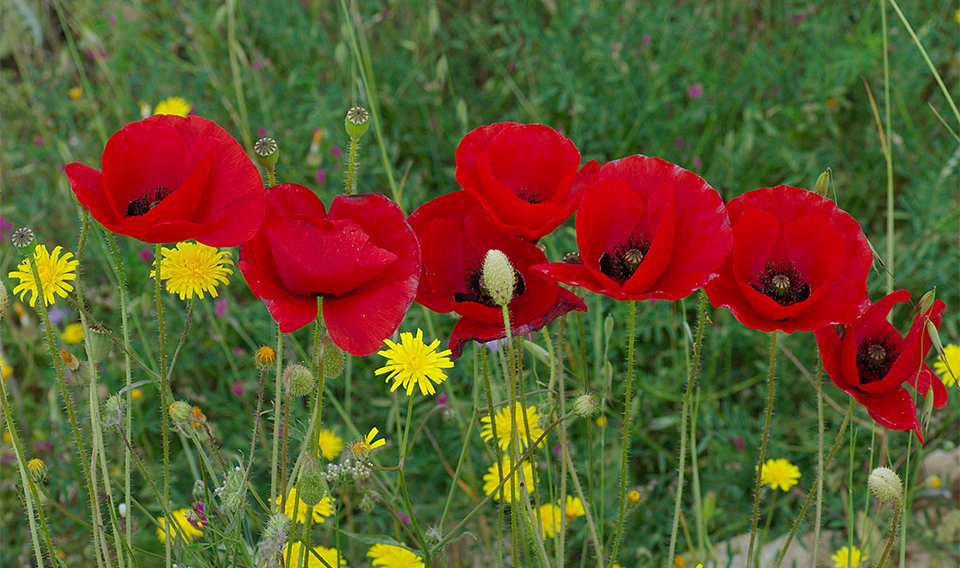 Red poppy is native to Europe, North Africa, and temperate regions of Asia, and is naturalized in North and South America. It thrives on cultivated land and on road verges. The flowers are picked in summer.

Red poppy contains alkaloids (including papaverine, rhoeadine, isorhoeadine, and many others), meconic acid, mekocyanin, mucilage, and tannin. The alkaloids are similar to those in the opium poppy (P. somniferum), but are much milder.

According to Agnus Castus, writing in the 14th century, “If a man hawe ony peyne aboutyn his eyne or if a man hawe a mygreyn tak this herb and stamp it and nedle it with oyle de olywe and anoynt ther-with the forhed and it schal amende the syth and slake the peyne and distroye the mygreyn.”

Red poppy flowers are mildly analgesic and sedative, and have long been used in European herbal medicine, particularly for ailments in children and the elderly. Chiefly employed as a mild pain reliever and as a treatment for irritable coughs, red poppy also helps reduce nervous overactivity. The herb may be used in the treatment of insomnia, general irritability, coughs—especially paroxysmal coughs—and asthma, and is generally given as a syrup.

Use only under professional supervision. All parts of red poppy except the seeds are potentially toxic if eaten.