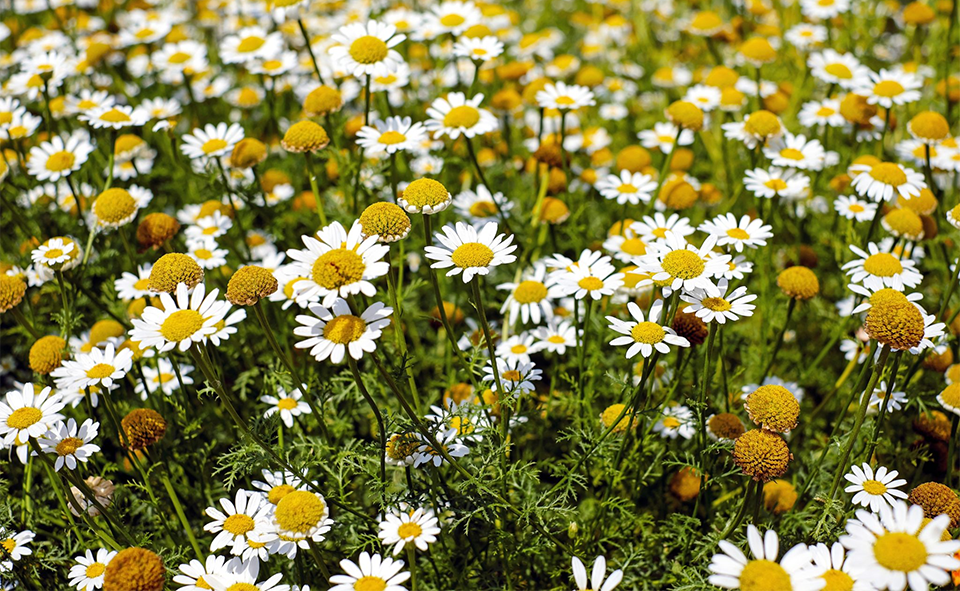 Aromatic perennial growing to 20 in (50 cm). Has feathery leaves and daisy-like flower heads.

Native to western Europe, Roman chamomile is now cultivated across Europe, and also in other temperate regions. The flowers are harvested as they open in summer.

Roman chamomile contains up to 1.75% essential oil (including tiglic and angelic acid esters, chamazulene and other sesquiterpene lactones), flavonoids, coumarins, and phenolic acids.

Though called Roman chamomile, this herb was not cultivated in Rome until the 16th century, probably arriving there from Britain.

A remedy for the digestive system, Roman chamomile is often used interchangeably with German chamomile (Chamomilla recutita). However, an infusion of Roman chamomile has a more pronounced bitter action than its German namesake. It is an excellent treatment for nausea, vomiting, indigestion, and loss of appetite.

It is also sedative, antispasmodic, and mildly analgesic, and will relieve colic, cramps, and other cramping pains. By stimulating digestive secretions and relaxing the muscles of the gut, it helps normalize digestive function. Roman chamomile may also be taken for headaches and migraine, even by children. Its marked anti-inflammatory and anti-allergenic properties make it helpful when applied to irritated skin.