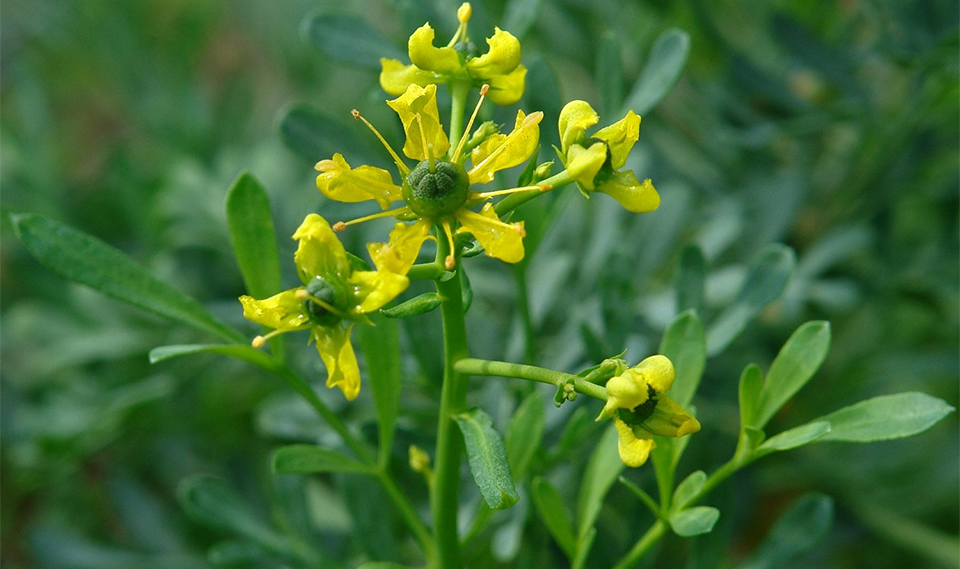 Rue grows in the Mediterranean region, preferring open sunny sites. It is also cultivated in many parts of the world as both a garden ornamental and a medicinal plant. The aerial parts are gathered in summer.

Rue contains about 0.5% volatile oil (including 50–90% 2-undecanone), flavonoids (including rutin), furanocoumarins (including bergapten), and about 1.4% furoquinoline alkaloids (including fagarine, arborinine, skimmianine, and others). Rutin has the effect of supporting and strengthening the inner lining of blood vessels and reducing blood pressure.

In ancient Greece and Egypt, rue was employed to stimulate menstrual bleeding, to induce abortion, and to strengthen the eyesight.

Rue is chiefly used to encourage the onset of menstruation. It stimulates the muscles of the uterus and promotes menstrual blood flow. In European herbal medicine, rue has also been taken to treat conditions as varied as hysteria, epilepsy, vertigo, colic, intestinal worms, poisoning, and eye problems. The latter use is well founded, as an infusion used as an eyewash brings quick relief to strained and tired eyes, and reputedly improves the eyesight. Rue has been used to treat many other conditions, including multiple sclerosis and Bell’s palsy.

Rue is currently being investigated for its potential use as an anticancer treatment.

The related species, R. chalepensis, which is also native to the Mediterranean region, is used to expel worms, to promote menstrual flow, and to soothe sore eyes.

Rue is toxic in excess. Never take during pregnancy. The fresh plant frequently causes dermatitis, so wear gloves while handling it. Taken internally, rue may cause an allergic skin reaction to sunlight.