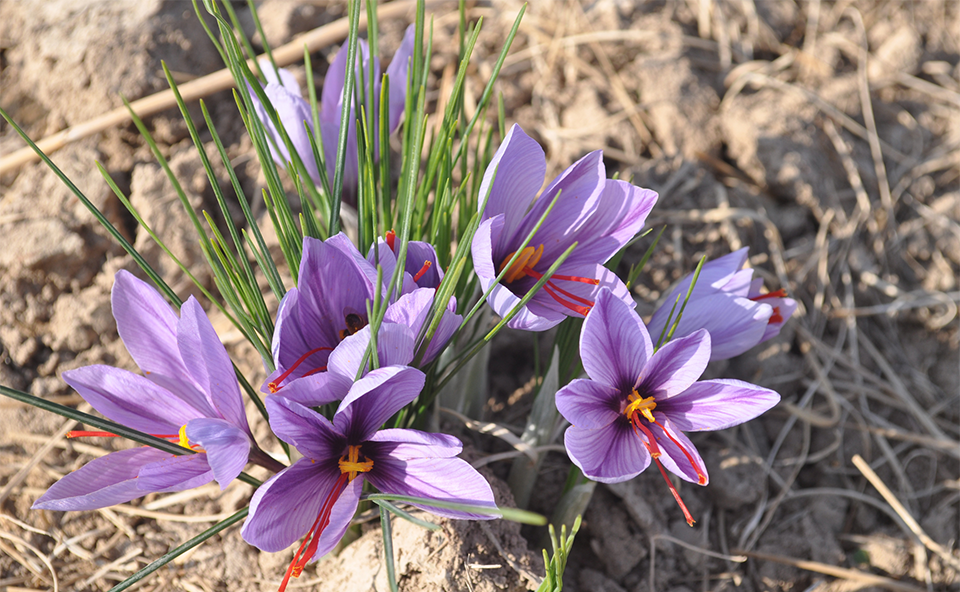 Perhaps most familiar as an ingredient in the Spanish dish paella, saffron is a prized herbal medicine that by weight is more valuable than gold. The thin, deep-orange filaments picked from the saffron flower have longstanding traditional use as a remedy for lowered mood, menstrual disorders, and as a sexual tonic. Current research is endorsing some of these findings, and saffron clearly offers significant health benefits.

Saffron prefers a sunny, well-drained site. It is cultivated in Iran, which grows roughly 90% of world production. The stigma are collected in the autumn when the plant is in flower. The flowers are first cut, the stigma then being plucked from within. The corms (bulbs) naturally reproduce themselves—one corm producing five after 3 years.

Saffron should not be confused with meadow saffron (Colchicum autumnale), an important (but toxic) medicinal plant that is only distantly related to saffron.

Depression: Several clinical trials have found saffron to be beneficial in depression. In 2005, Iranian researchers found that saffron was as effective as fluoxetine (Prozac) for mild to moderate depression. In a different clinical trial, saffron was shown to help relieve the symptoms of sexual dysfunction (in both men and women) that can sometimes present themselves as a side effect of taking fluoxetine.

Eye health: Research from a combined Italian-Australian study suggests that saffron has a useful role to play in helping to support eye health in the early stages of macular degeneration. The study found that retinal function improved in those taking saffron. Other research suggests that saffron might prove useful in treating glaucoma.

Cognitive function: Saffron appears to have marked neuroprotective activity. Iranian clinical research has examined saffron’s therapeutic potential in people with moderate Alzheimer’s disease. Though still at a very early stage, two small studies indicate that saffron, and particularly the crocins within it, acts on the brain to improve memory and cognitive function, including in those with dementia.

Adulteration: Due to its high cost, saffron is frequently adulterated. For medicinal purposes, good-quality material is essential.

Traditional uses: Avicenna, a 10th-century physician famous for his Canon of Medicine, described saffron in detail, noting that it was an “exhilarant and cardiac tonic” that “strengthens eyesight,” “reduces appetite,” and is “a stimulant of sexual desire.” A rereading of the Canon paved the way for much of the Iranian research over recent years.

The herbalist Christopher Catton, following the English view of saffron as a “cordial” or heart tonic, wrote in 1862 that “Saffron hath power to quicken the spirits, and the virtue thereof pierceth by and by to the heart, provoking laughter and merriness.” It is said that rubbed into the palm, saffron has an immediate action on the heart.

Chinese herbal medicine: In Chinese medicine, saffron is used for depression and shock. It also has long use as a remedy for menstrual difficulties such as period cramps and pre-menstrual syndrome (PMS). Saffron is also used to treat skin disorders, stomach weakness, and to reduce appetite.