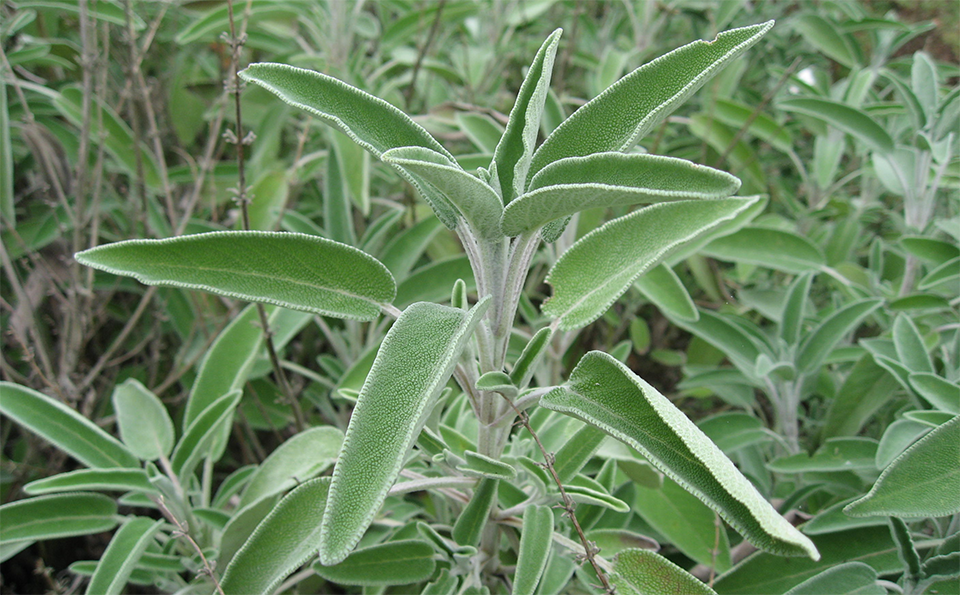 Sage’s botanical name is a clue to its medicinal importance: Salvia comes from salvare, meaning “to cure” in Latin. A medieval saying echoes this: “Why should a man die while sage grows in his garden?” Today, sage is an excellent remedy for sore throats, poor digestion, and irregular periods, and it is also taken as a gently stimulating tonic. It has a slightly warm, noticeably bitter, and astringent taste.

Native to the Mediterranean, sage is cultivated all around the world, thriving in sunny conditions. It is grown from seed in spring and the plants are replaced after 3 to 4 years. The leaves are picked in summer.

In all, there are about 500 species of Salvia. Spanish sage (S. lavandulifolia) is the most familiar culinary variety and does not contain thujone. Two close relatives of S. officinalis are dan shen (S. miltiorrhiza) and clary sage (S. sclarea).

Nerve tonic: Ongoing research taking place in the UK provides strong support for the traditional use of sage to enhance memory. In the most recent study (2008), healthy volunteers averaging 73 years of age showed a significant improvement in memory processing and accuracy of attention after taking a single dose of sage extract. Interestingly, a moderate dose, equivalent to 2.5 g of sage, proved most effective, more so than higher doses.

Sore throat: In a randomized trial published during 2006, a sage throat spray was found to relieve throat pain in people who had acute throat infection.

Hormonal activity: The herb’s longstanding use during menopause has also been researched. In the most recent study, undertaken in Switzerland (2011), women with at least 12 months of hot flashes reported an average 64% decrease in symptoms after 8 weeks of taking sage.

Lowering blood fat levels: A clinical trial published in 2011 in Phytotherapy Research concluded that “sage may be effective and safe in the treatment of hyperlipidemia.” All blood fat markers showed improvement in those taking sage.

Sore throat: Sage’s combination of antiseptic and astringent action makes it ideal as a gargle for sore throats and throat infections. It can equally be used for mouth ulcers and sore gums.

Hormonal remedy: A valuable remedy for irregular and scanty periods, sage encourages better blood flow at menstruation. The herb is thought to reduce or prevent sweating and can prove particularly effective during menopause. It also helps to reduce hot flashes and night sweats and it has a calming, relaxant aspect. Sage will decrease breast-milk production, and is traditionally taken by a mother while weaning.

Digestive tonic: Sage has a long traditional use as a digestive aid, supporting stomach health and promoting better digestion and absorption.