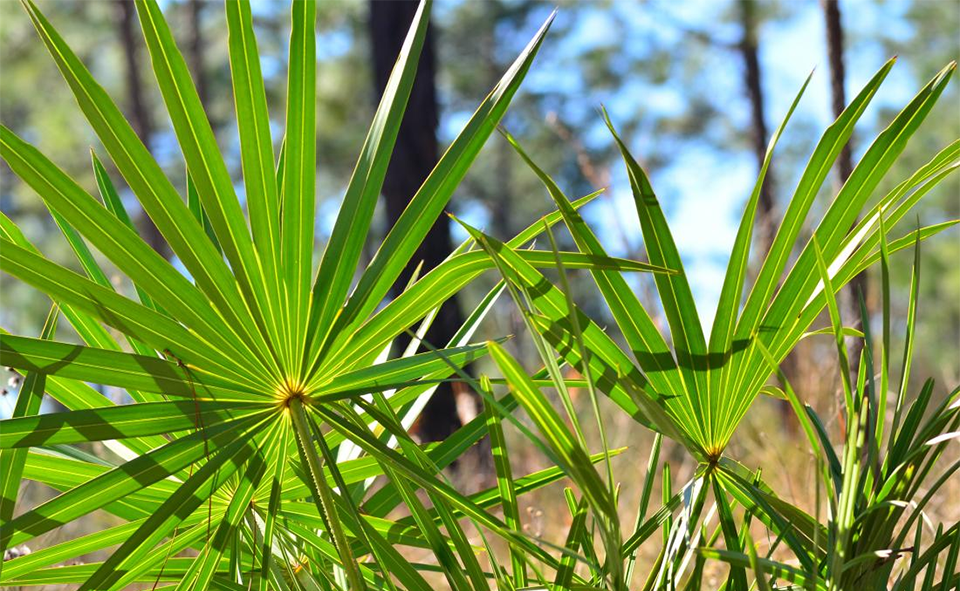 Saw palmetto berries were eaten by Native North Americans and animals. According to legend, on seeing the animals grow “sleek and fat,” European settlers tried the berries and attributed medicinal properties to them. The fruit pulp was used as a tonic from the 19th century onward, and today it is used to help in debility, for urinary tract problems, and for reducing an enlarged prostate gland.

Saw palmetto is indigenous to North America and can be found growing in sand dunes along the Atlantic and Caribbean coasts from South Carolina to Texas. It is propagated from seed in spring and needs well-drained soil and plenty of sun. The berries are harvested when ripe in autumn, then dried, often with the seeds removed.

The Maya of Central America used the roots or leaves of S. japa, another small palm, as a remedy for dysentery and abdominal pain. The crushed roots of S. adamsonii were used by the Houma, who also lived in Central America, as an eye lotion.

Benign prostatic hypertrophy (BPH): Extensive clinical research, mostly in Europe, has shown that a lipid or fat extract of saw palmetto is effective in reversing enlargement of the prostate gland. In the process, the extract reduces urinary retention and eases urine flow. In many European countries saw palmetto extract is a standard treatment for enlarged prostate. It is not clear how extracts of the herb work.

Combination with nettle root: In the late 1990s two clinical trials gave men with early stage BPH a combination of saw palmetto and nettle root. One trial compared the herbs with placebo, the other with finasteride, a standard conventional treatment for BPH. Results for the herb combination in both trials were very good, with a clear improvement in symptoms in respect to placebo, and similar outcomes for those taking the herbs or finasteride, but those taking the herbs experienced fewer side effects.

Urinary remedy: Saw palmetto has been nicknamed the “plant catheter.” This is because it has the ability to strengthen the neck of the bladder, and to reduce an enlarged prostate gland. It can be equally useful in treating lower urinary tract symptoms, such as pain, frequency, and urgency in urination. It is a useful remedy in cystitis and prostatitis (inflammation of the prostate gland).

Anabolic action: Saw palmetto is a tonic and is one of the few Western remedies that is considered to be anabolic—it strengthens and builds body tissues and encourages weight gain. Fruit pulp or tincture is given to those suffering from wasting illnesses and for general debility and failure to thrive.