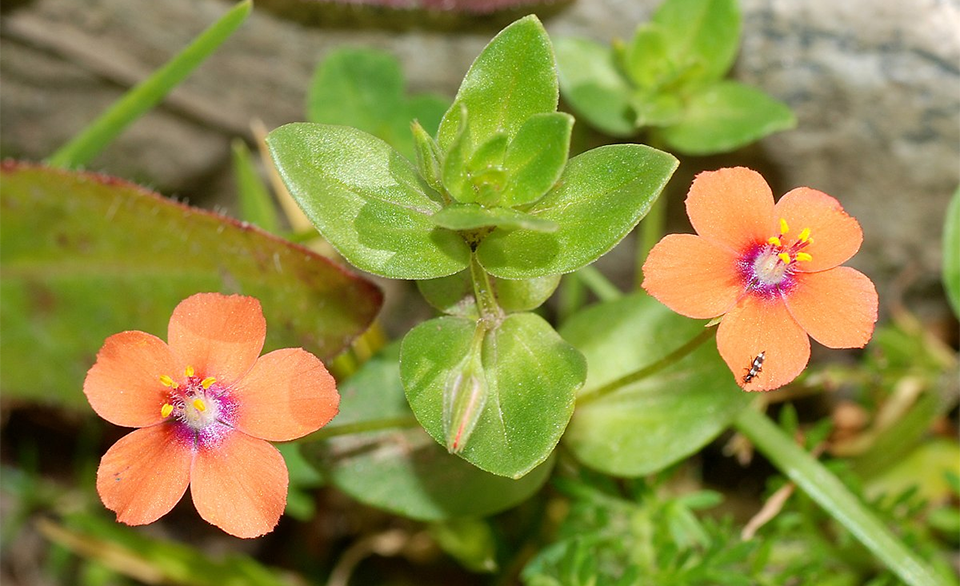 Creeping annual growing to 2 in (5 cm) with oval- to lance-shaped leaves and salmon-red flowers on long stems.

Scarlet pimpernel is found in Europe and in temperate regions generally. It prefers open areas and untended sandy ground, and is gathered in summer toward the end of its flowering period.

The herb contains saponins (including anagalline), tannins, and cucurbitacins. The latter are cytotoxic (damaging to cells).

Classical Greek writers believed scarlet pimpernel helped melancholy. In her Modern Herbal (1931), Mrs. Grieve quotes an old saying: “No heart can think, no tongue can tell/The virtues of the pimpernel.” It has been employed in European folk medicine as a treatment for gallstones, liver cirrhosis, lung problems, kidney stones, urinary infections, gout, and rheumatism. This pattern of use suggests a detoxifying action for the plant.

Little used by medical herbalists today, scarlet pimpernel has diuretic, sweat-inducing, and expectorant properties. As an expectorant, it was used to stimulate the coughing up of mucus and help recovery from colds and flu. It has been used to treat epilepsy and mental problems for 2,000 years, but there is little evidence to support its efficacy.

Scarlet pimpernel is not recommended for medicinal use for more than 2–3 weeks.