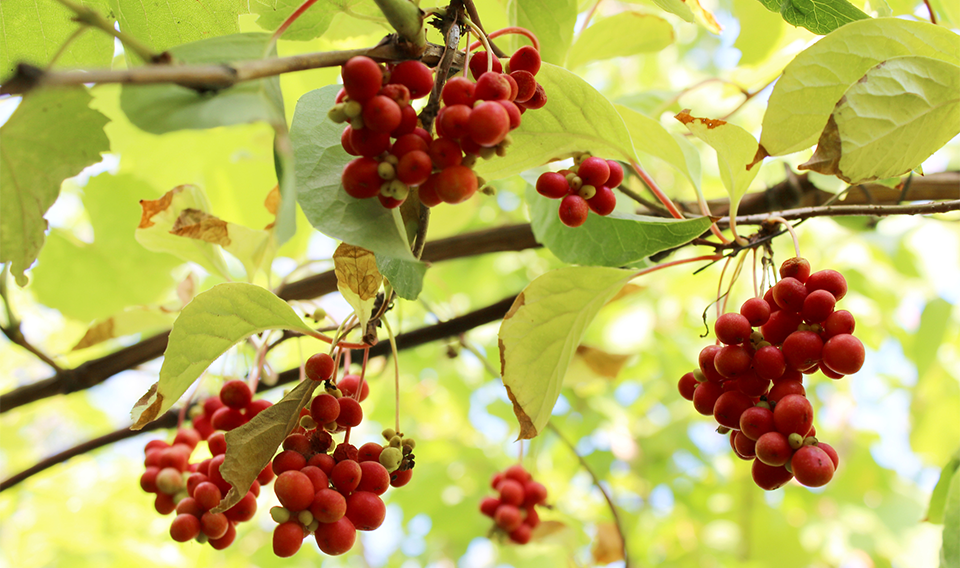 Schisandra ranks along with other Chinese tonic herbs as an excellent tonic and restorative. It helps in stressful times and increases zest for life. The berries tone the kidneys and sexual organs, protect the liver, strengthen nervous function, and cleanse the blood. The name wu wei zi means “5-flavored herb,” since this herb reputedly tastes of the 5 main elemental energies. It has a sour, salty, and slightly warm taste.

Schisandra is cultivated in northeastern China, especially in the provinces of Jilin, Lianoning, Heilongjiang, and Hebei. It is propagated from seed in spring. The fruit is harvested in autumn when it is fully ripe.

Though less therapeutically active than schisandra, the berries of the related nan wu wei zi (S. sphenanthera) are commonly used in Chinese medicine for the treatment of acute coughs.

Aiding performance: Healthy adults given schisandra extract showed a marked improvement in both physical and mental stamina. Russian sailors given schisandra had an increased capacity to maintain and endure normal working regimens, and Russian factory workers were reported to have decreased sickness levels.

Protecting the liver: The lignans have been shown to have pronounced antihepatoxic (liver-protective) action. Up to 30 different lignans have been identified in schisandra, which all contribute to this effect. One clinical trial reported a 76% success rate in treating patients with hepatitis, with no side effects being noted.

Nervous system: Schisandra is known to stimulate the nervous system, increasing the speed of reflex nervous responses and improving mental clarity. The berries have a mild antidepressant activity and are thought to improve nervous irritability and forgetfulness. In Russia, schisandra has been used to treat people with severe mental health disorders including schizophrenia and chronic alcoholism. Clinical studies in 1967 found that those taking a schisandra tincture became more sociable and less emotionally tense.

Tonic: Schisandra is a major tonic herb and acts throughout the body, strengthening and toning many different organs.

Sexual stimulant: Probably best known as a sexual tonic for both men and women, schisandra reputedly increases the secretion of sexual fluids and, in men, it also improves sexual stamina.

Liver treatment herb: Schisandra has proven benefits for the liver and is used in the treatment of hepatitis and poor liver function.

Sedative: Although a stimulant, schisandra is used in Chinese medicine to “quiet the spirit and calm the heart.” It is given for insomnia and dream disturbed sleep and is a fine example of how adaptogenic herbs often work in apparently contradictory ways to restore normal body function.

Mental & emotional disorders: In Russia and China, schisandra berries have traditionally been prescribed to treat mental illnesses such as neuroses. They are also given to improve concentration and coordination and are a traditional remedy for forgetfulness and irritability.

Balancing fluid levels: Schisandra is used to tone up and strengthen kidney function and to help the body balance levels of fluid, making it helpful for treating night sweats, thirst, and urinary frequency.

Skin rashes: Recently, Chinese herbalists have started to use schisandra to treat urticaria (hives) and other skin problems, including eczema. It is usually given for these conditions in the form of a medicinal wine.

Additional uses: Schisandra is used for a wide variety of other physical disorders, including diarrhea and dysentery, as well as to help improve failing sight and hearing.