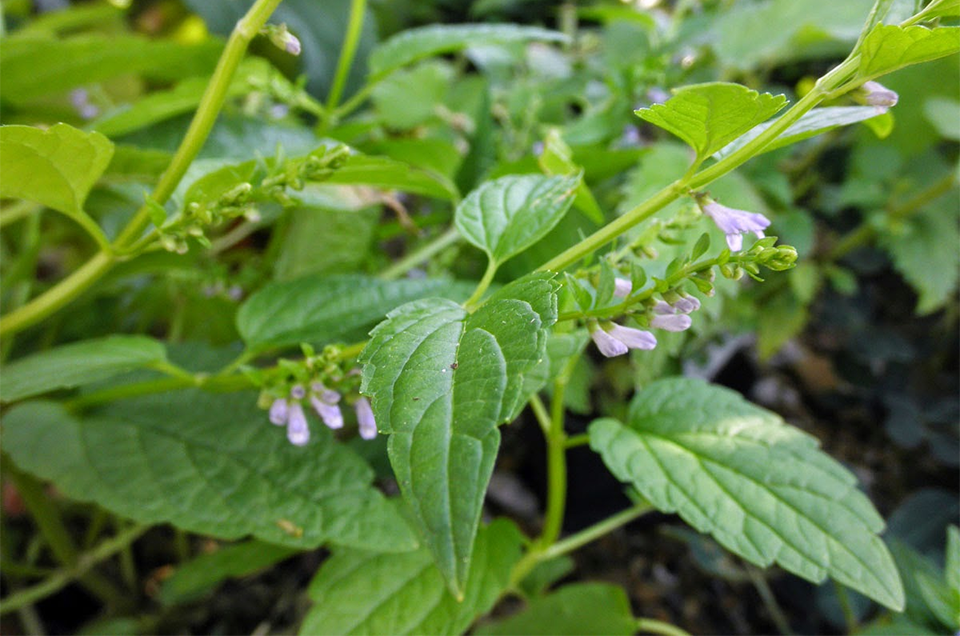 A Native American herb, skullcap was traditionally taken for menstrual problems. It was also used in purification ceremonies when menstrual taboos had been broken. Skullcap became well known in 19th-century America as a treatment for rabies, hence its folk name “mad dog.” Today, it is mainly used as a tonic and sedative for the nerves in times of stress. It has a bitter, slightly astringent taste.

A native of North America, skullcap still grows wild in much of the U.S. and Canada. It thrives in damp conditions, for example on riverbanks, and needs plenty of sun. Skullcap can be propagated from seed or by root division in spring. The aerial parts of 3- to 4-year-old plants are harvested in summer, when in flower.

There are around 100 species of Scutellaria. In the past, European skullcap (S. galericulata) and lesser skullcap (S. minor) have been used in a similar way to S. lateriflora, but today they are considered to have a less important therapeutic action. Baical skullcap (S. baicalensis) is also closely related.

Anxiety remedy: Little research has been carried out on this species of Scutellaria despite its long use in North American and British herbal medicine to ease anxiety and stress. A small English study published in 2011 tested skullcap against placebo in reducing anxiety in 43 “non-anxious” people. Those taking skullcap showed significantly better overall mood levels at the end of the 2 weeks of the study.

19th-century remedy: The Physiomedicalists (followers of a 19th-century Anglo-American school of herbal medicine) first discovered skullcap’s use as a nervine. They recognized that it has a “deeper” action on the nervous system than many other herbs and used it for hysteria, epilepsy, convulsions, and rabies, as well as for serious mental illnesses such as schizophrenia.

Current uses: Today, skullcap is taken mainly as a nerve tonic and for its restorative properties. It helps support and nourish the nervous system, and calms and relieves stress and anxiety. Its antispasmodic action makes it useful for conditions where stress and worry cause muscular tension. Skullcap is often prescribed on its own, or with other sedative herbs, to treat insomnia, and it is also given for period pain.