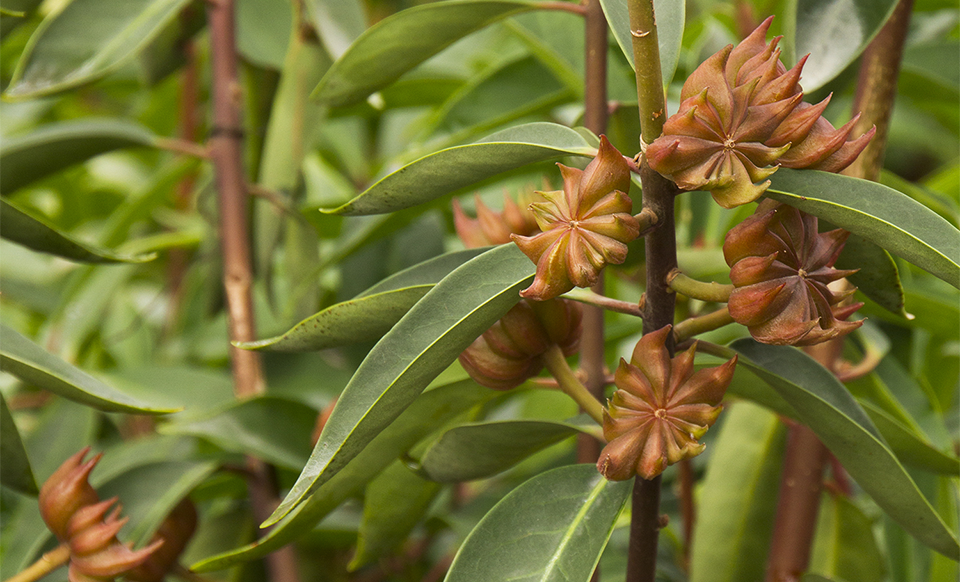 Native to China, India and Vietnam, star anise grows in tropical regions across the world. The fruit is harvested when ripe.

Star anise contains a volatile oil (mostly anethole), sesquiterpenoids, and flavonoids, including quercetin. Anethole calms the digestive system and relieves gas. The sesquiterpenoids have analgesic activity. Shikimic acid, found in the seed pods, was until recently used as the main source for the production of Tamiflu, a prescribed anti-viral medicine.

Due to its high anethole content, star anise has a similar taste to anise (Pipinella anisum), and both are used principally as spices. The herb’s Chinese name, ba jiao hui xian, means “8-horned fennel.”

Used in Chinese herbal medicine as a remedy for rheumaism, back pain, and hernias, star anise has stimulant, diuretic, and digestive properties. It makes an effective remedy for gas and indigestion—especially colic—and can safely be given to children. To treat hernias of the intestine or bladder, star anise is often mixed with fennel (Foeniculum vulgare). Both herbs help to relax the organ’s muscles and relieve spasm. Star anise is also used for toothache.

Japanese star anise (Illicium anisatum), which is very similar to star anise, contains a toxic compound and can cause serious side effects.