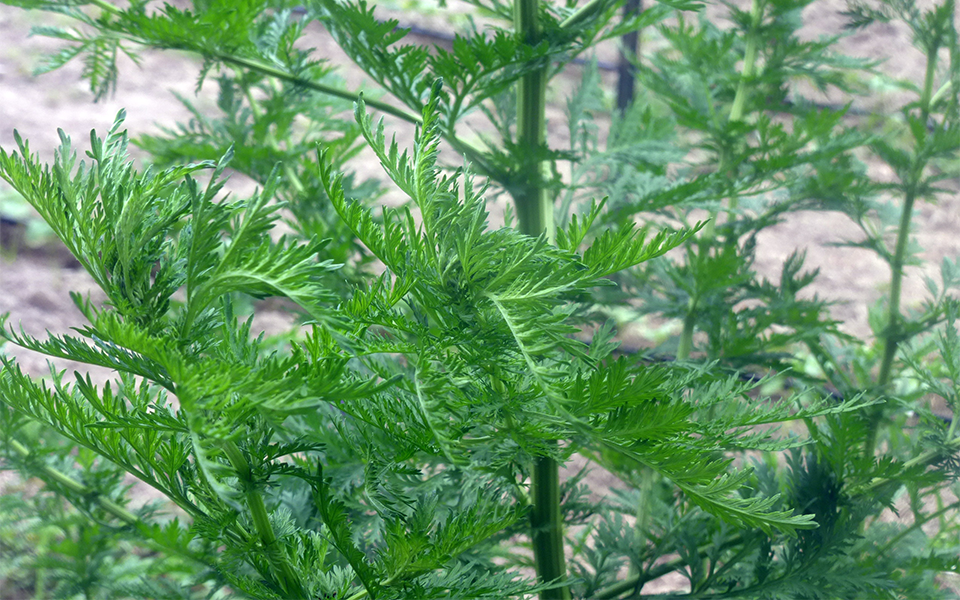 Until the 1970s, sweet Annie was regarded as just another Artemisia, though one used in traditional Chinese medicine for treating malaria. After extensive research, sweet Annie and its key constituent artemisinin were shown to have powerful antimalarial activity and few side effects. Artemisinin rapidly became the key treatment for severe malaria worldwide, and is still the treatment of choice in many acute cases of the illness.

Sweet Annie grows in grasslands and in open areas in Vietnam, Japan, China, Russia, and North America. It is cultivated in eastern China. The herb is propagated from seed in spring or by dividing the rootstock in autumn. It is harvested in summer before flowering.

The related A. apiacea is used interchangeably with sweet Annie in China and is employed as a general tonic in Vietnam. Many other Artemisia species are used medicinally: A. abrotanum; A. absinthium; A. capillaris and A. cina; A. dracunculus and A. vulgaris.

Chinese research: Sweet Annie was extensively researched in China in the 1980s, and studies have demonstrated that its key active constituent is an effective antimalarial, having a powerful action against the malaria parasite Plasmodium, a protozoan introduced into the body by the mosquito.

Artemisinin: Clinical trials, notably in Thailand, show that it can provide vital treatment in the acute stages of malaria, proving up to 90% effective in countering the infection. Artemisinin has a lesser role to play in chronic malaria and prevention of the disease.

Anti-cancer potential: Laboratory studies suggest that sweet Annie has marked anticancer activity, promoting programmed cell death and inhibiting blood vessel growth. No clinical trials have so far been undertaken, but sweet Annie is claimed to be useful particularly in breast cancer and leukemia. Synthetic molecules modelled on artemisinin are also being researched as potential anticancer drugs.

History: The first mention of sweet Annie was in a Chinese text of 168 BCE. Traditionally, it was seen as an herb that helped “to clear and relieve summer heat.”

Cooling properties: Sweet Annie has a cool, bitter taste and is used for conditions brought on by heat, especially with symptoms such as fever, headaches, dizziness, and a tight-chested sensation. It is used to treat chronic fevers, night fevers, and morning chills and is a traditional remedy for nosebleeds associated with heat.

Antimalarial: Sweet Annie has been used to treat the fevers and chills of malaria for thousands of years, and artemisinin is now used in many countries as an antimalarial. Artemisinin reduces the risk of developing malaria and aids a quick recovery, though drug resistance to it is now being seen. The whole plant may also be used to treat malaria and act as a preventative, though large doses are required.