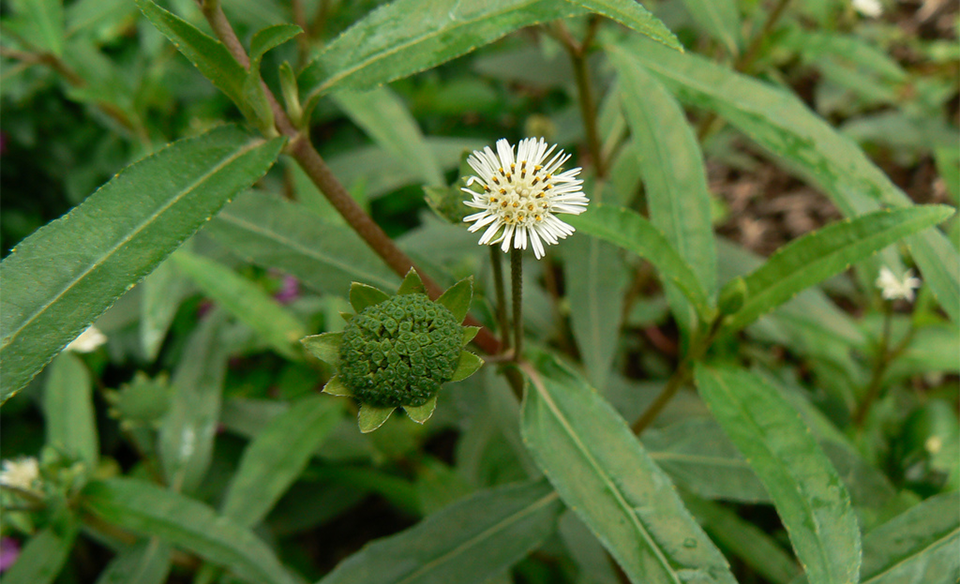 Trailing eclipta is native to Africa, Asia, and Australia. It is now found throughout the tropics, being particularly common in India, China, and Queensland and New South Wales in Australia. It is harvested in early autumn.

Trailing eclipta is first mentioned in herbal literature in the Chinese Tang Materia Medica of 659 CE. The herb contains a black pigment that has been used to color the hair in India, and mothers wash babies’ heads in a decoction of the leaves to encourage hair growth. It is also used as an ink for tattooing. The leaves are also eaten as a vegetable.

Trailing eclipta has remarkably similar uses in Ayurvedic and Chinese herbal medicine. In both of these traditions, a decoction is used to invigorate the liver, to prevent premature graying of the hair, and to staunch bleeding, especially from the uterus. In the Chinese tradition, the herb is considered a yin tonic; in Ayurvedic medicine it is thought to prevent aging. In the Caribbean, the juice is sometimes taken for asthma and bronchitis. Trailing eclipta is also used there as a treatment for enlarged glands, as well as for dizziness, vertigo, and blurred vision.

Several laboratory experiments have shown that eclipta regulates enzyme levels within the liver and exerts a protective activity on it.