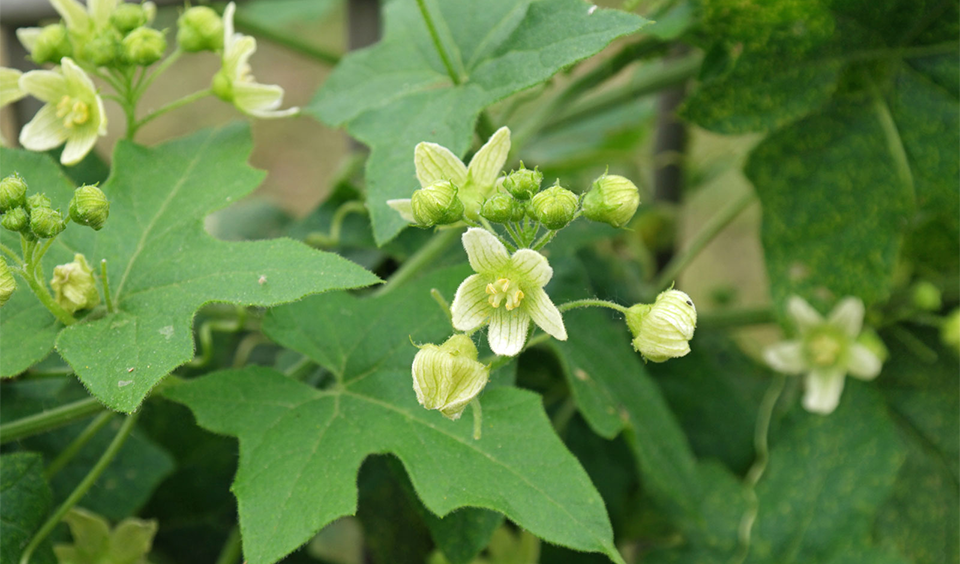 Perennial climbing vine with fleshy taproot up to 6 in (15 cm) thick. Straggling stem with tendrils, greenish flowers, and red berries.

White bryony is native to southern England and parts of Europe. The root is dug up in autumn.

From prehistory to the Middle Ages, the thick roots of white bryony were cut into a human shape as a substitute (or a counterfeit) for mandrake root (Mandragora officinarum), which was believed to afford magical protection. The Greek physician Dioscorides (1st century CE) reports that the leaves, fruit, and root of white bryony were applied to gangrenous wounds. In medieval England, the plant was used to treat leprosy.

A powerful cathartic and purgative, bryony is used with great caution in herbal medicine today. It is principally prescribed for painful rheumatic conditions. It may be taken internally, or applied as a counter irritant, causing swelling and increased blood flow to the area. White bryony is also given for other inflammatory conditions such as duodenal ulcers, asthma, bronchitis, and pleurisy, and may be used to reduce high blood pressure. The whole herb has antiviral activity and research is now suggesting that it acts as an adaptogen—helping the body to adapt more effectively to stress and strain.

B. alba is used in homeopathic medicine. Black bryony (Tamus communis) is an unrelated plant with approximately similar uses.

Bryony is a toxic plant. Use only under professional supervision. Do not take during pregnancy.