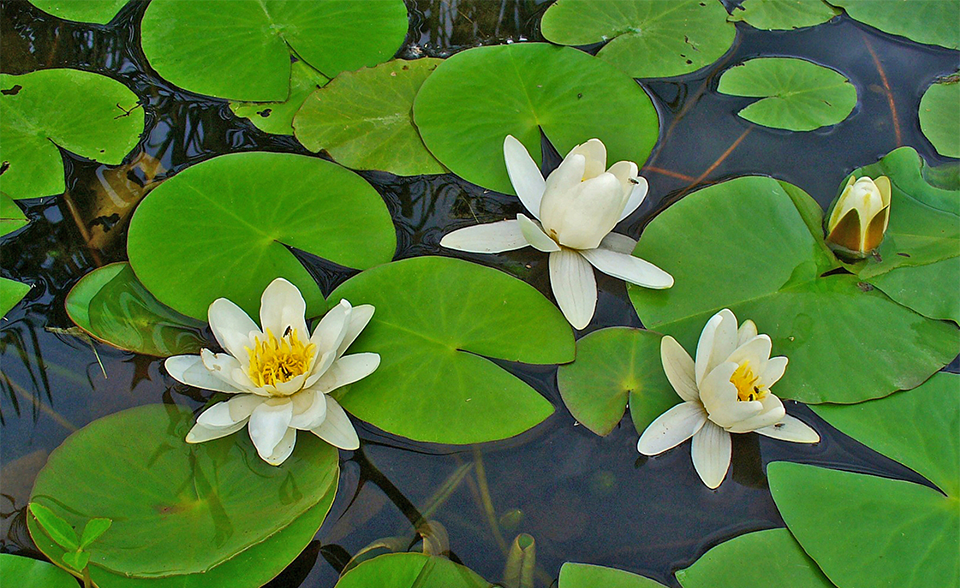 Native to Europe, white water lily is found in ponds and in still water in lakes, rivers, and canals. The rhizome is gathered in autumn.

According to the 17th-century herbalist Nicholas Culpeper, “The leaves do cool all inflammations … the syrup helpeth much to procure rest, and to settle the brains of frantic persons.”

The rhizome of the white water lily is astringent and antiseptic. A decoction treats dysentery, or diarrhea due to irritable bowel syndrome. White water lily has also been employed to treat chronic bronchitis and kidney pain, and taken as a gargle for sore throats.

The rhizome may be used to make a douche for vaginal soreness and discharge, or to make a poultice for boils and abscesses. White water lily flowers have long been reputed to reduce sexual drive. Their generally calming and sedative effect on the nervous system makes them useful in the treatment of insomnia, anxiety, and similar disorders of this nature.

Studies suggest that white water lily may, as has been claimed, act as an anaphrodisiac, diminishing sexual drive. The plant has been found to lower blood pressure in animals.

The white pond lily (N. odorata) is a close American relative used for much the same purposes. The rhizome of the white lotus (N. lotus), native to tropical Africa and Asia, has been used medicinally since the earliest times, and is taken for indigestion, dysentery, and other gastrointestinal problems.