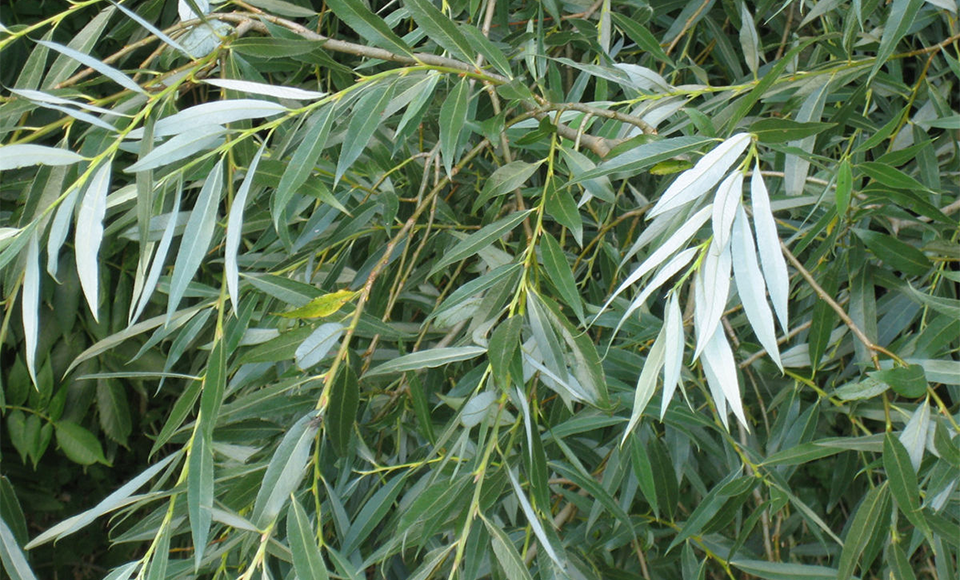 Justly famous as the original source of salicylic acid (the forerunner of aspirin), white willow and closely related species have been used for thousands of years in Europe, Africa, Asia, and North America to relieve joint pain and manage fevers. Dioscorides, a Greek physician in the 1st century CE, suggested taking “willow leaves, mashed with a little pepper and drunk with wine” to relieve lower back pain.

Native to much of Europe, white willow is also found in North Africa and Asia, thriving in damp areas, such as on riverbanks. It is propagated from semi-ripe cuttings in summer or from hardwood cuttings in winter. The trees are frequently pollarded and bark is stripped from branches of 2- to 5-year-old trees in spring.

Many Salix species, for example crack willow (S. fragilis), are used interchangeably with white willow. S. acmophylla is used on the Indian subcontinent as a remedy for fevers. In North American herbal medicine, black willow (S. nigra) is given as an anaphrodisiac (sexual depressant).

Salicylic acid & aspirin: Salicylic acid, a strongly anti-inflammatory and analgesic compound, was first isolated from salicin in willow bark in 1838. It was the forerunner of aspirin, a chemical drug developed in Germany during 1899. Salicylic acid (and salicin) has many of the properties of aspirin but causes notably fewer side effects. As such, it is now being widely researched as an alternative to aspirin-based anti-inflammatory medicines such as ibuprofen. Unlike aspirin, salicylic acid does not thin the blood, and any problems it might cause within the digestive tract are likely to be minor.

Clinical trials: Over the last 15 years, clinical trials have shown that high-strength willow bark extract offers an effective alternative to mainstream anti-inflammatory medicines, particularly in treating conditions such as osteoarthritis and lower back pain. In a 2008 clinical trial published in Phytomedicine, among people with arthritis of the hip or knee, aged between 50 and 75, those taking willow bark extract, after 6 weeks, were rated by doctors as doing significantly better than those taking standard aspirin-based medication. Those taking willow bark reported far fewer side effects.

Joint remedy: White willow is an excellent remedy for arthritic and rheumatic pain affecting the back, and joints such as the knees and hips, though large doses may be required, such as a standardized tablet. In combination with other herbs and dietary changes, it relieves inflammation and swelling, and improves mobility in painful or creaky joints.

Fevers & pain: White willow is taken to manage high fevers. It may also be used to ease headaches and head pain.

Menopause: A cooling herb that reduces sweating, willow bark can be helpful in controlling symptoms such as hot flashes and night sweats.