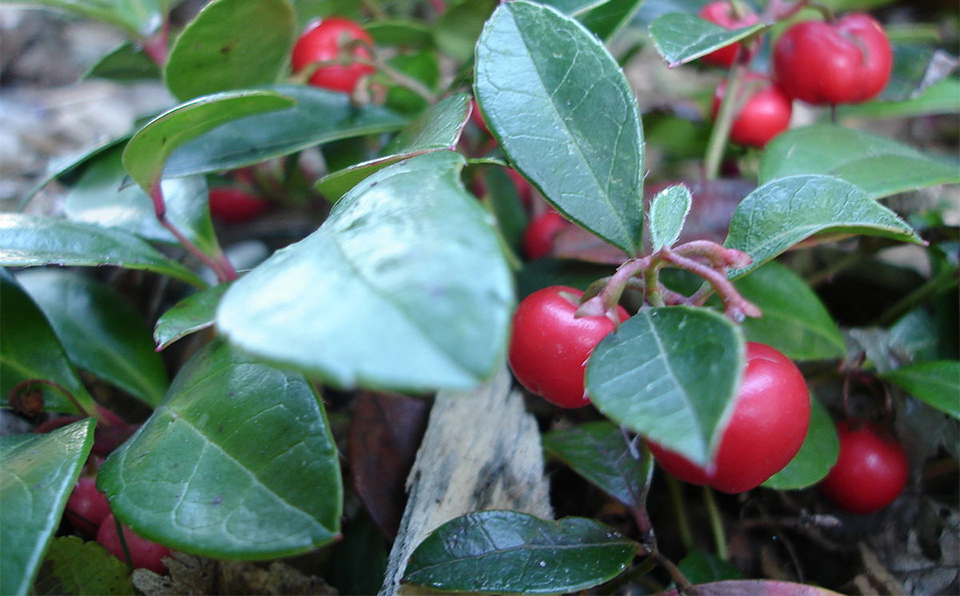 Native to North America, wintergreen is found in woodland and exposed mountainous areas. The leaves and fruit are gathered in summer.

Wintergreen was popular with Native Americans, who used it for treating back pain, rheumatism, fever, headaches, sore throats, and many other conditions. Samuel Thomson, founder of the 19th-century Physiomedicalist movement, combined it with hemlock (Conium maculatum) to treat severe fluid retention. The leaves have been used as a substitute for tea (Camellia sinensis), for example during the American Revolutionary War (1776–1784).

Wintergreen is strongly anti-inflammatory, antiseptic, and soothing to the digestive system. It is an effective remedy for rheumatic and arthritic problems, and, taken as a tea, it relieves flatulence and colic.

The essential oil, in the form of a liniment or ointment, brings relief to inflamed, swollen, or sore muscles, ligaments, and joints, and can also prove valuable in treating neurological conditions such as sciatica (pain resulting from pressure on a nerve in the lower spine) and trigeminal neuralgia (pain affecting a facial nerve). The oil is sometimes used to treat cellulitis, a bacterial infection causing the skin to become inflamed.

People who are sensitive to aspirin should not take wintergreen internally. Oil of wintergreen should never be taken internally, nor applied (even well diluted) to the skin of children under the age of 12 unless with professional supervision.