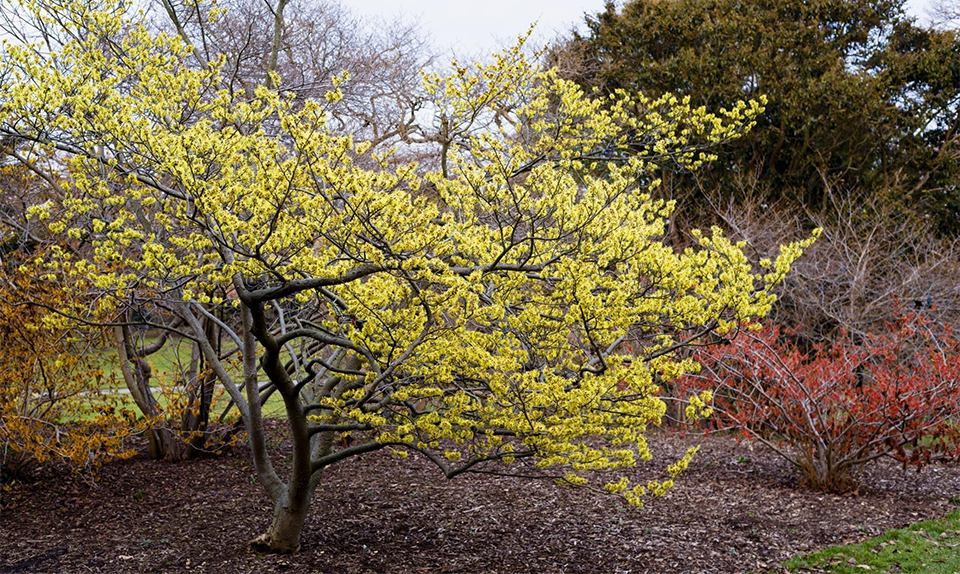 Witch hazel was a traditional remedy of many Native North American peoples. They used poultices soaked in a decoction of bark to treat tumors and inflammations, especially of the eye, and took the herb internally for hemorrhaging and heavy menstrual bleeding. European settlers in the 18th century soon came to value witch hazel for its astringency, and its use spread to Europe and beyond.

Witch hazel is a woodland tree, indigenous to Canada and eastern parts of the U.S. Today it is commonly cultivated in Europe. The trees are grown from hardwood cuttings or from seed, both of which are planted in autumn. The leaves are gathered in summer and dried. The bark is harvested during the autumn and dried as quickly as possible in the shade.

European hazel (Corylus avellana) is a similar herb. It is used occasionally in European herbal medicine as an astringent to treat diarrhea. The oil is nutritious and can be used to treat thread worms in children.

Established properties: Witch hazel contains large quantities of tannins. These have a drying, astringent effect, causing the tightening up of proteins in the skin and across the surface of abrasions. This creates a protective covering that increases resistance to inflammation and promotes healing of broken skin.

Witch hazel also appears to help damaged blood vessels beneath the skin. It is thought that this effect may be due to the flavonoids as well as to the tannins. When witch hazel is distilled it retains its astringency, suggesting that astringent agents other than tannins are present.

Skin problems: Witch hazel is a very useful herb for inflamed and tender skin conditions, such as eczema. It is mainly used where the skin has not been significantly broken and helps to protect the affected area and prevent infection.

Damaged veins: Witch hazel is valuable for damaged facial veins, varicose veins, and hemorrhoids, and is an effective remedy for bruises. Due to its astringent properties, it helps to tighten distended veins and restore their normal structure.

Other uses: A lotion can be applied to the skin for under lying problems such as cysts or tumors. Witch hazel also makes an effective eyewash for inflammation of the eyes. Less commonly, it is taken internally to alleviate diarrhea, helping to tighten up the mucous membranes of the intestines, and for bleeding of any kind.