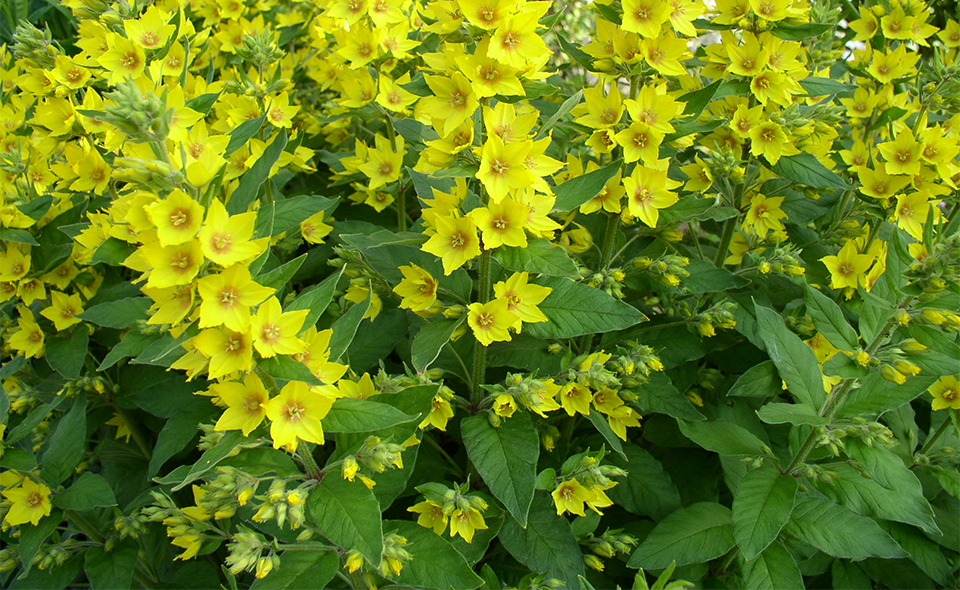 Native to Europe, yellow loosestrife commonly grows in damp hedgerows and near water. It is also cultivated as a garden plant. It is gathered when in flower in summer.

Pliny (23–79 CE) recorded that lysimachia, the plant’s Latin name, was a tribute to King Lysimachus of Sicily, who discovered its medicinal benefits. The name “loosestrife” refers to the plant’s reputed power to prevent conflict, particularly between animals, and to repel insects. The Greek physician Dioscorides (40–90 CE) recommended loosestrife to staunch wounds and for nosebleeds, and noted that its smoke would drive away snakes and flies.

An astringent herb, yellow loosestrife is principally used to treat gastrointestinal conditions such as diarrhea and dysentery, to stop internal and external bleeding, and to cleanse wounds. It makes a workable mouthwash for sore gums and mouth ulcers, and may be used to treat nosebleeds. Yellow loosestrife has also been taken as an expectorant.

The yellow pimpernel (L. nemorum), another European native, is astringent and staunches blood. Jin qian cao (L. christinae), from China, is a diuretic used to treat urinary pain. A Chinese trial showed that the latter is also effective in treating both kidney stones and gallstones.