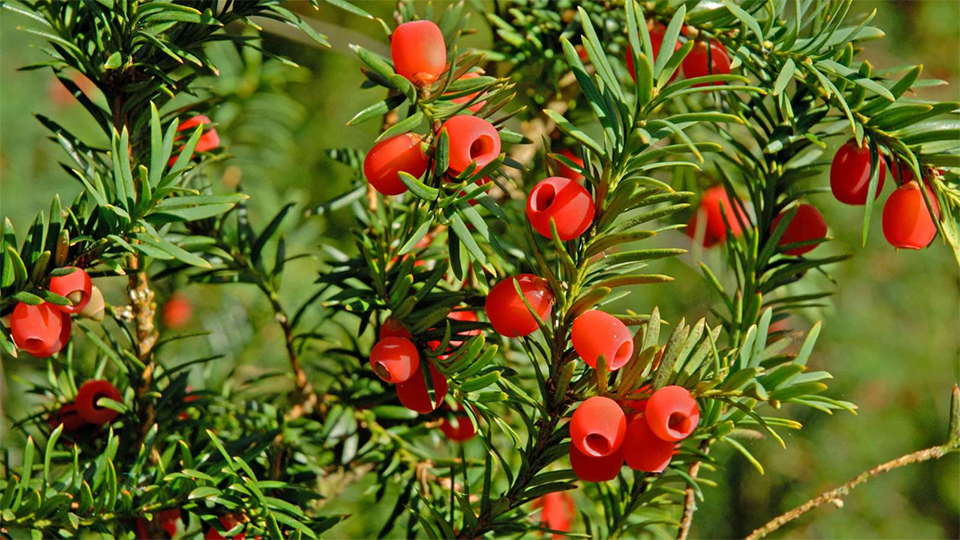 Yew grows throughout northern temperate zones. More often found in cultivation than in the wild, it prefers lime-rich soil. The leaves are gathered in spring.

Yew contains a mixture of alkaloids known as taxine, and also diterpenes (including taxol in some varieties), lignans, tannin, and resin.

The yew tree was sacred to the Druids, who are believed to have considered it an emblem of immortality. The Druids planted yews in holy sites, a practice that continued with the coming of Christianity. Many medieval churchyards contain ancient yews, some thought to be over 2,000 years old. In the Middle Ages, the best longbows were made from yew wood, as were magic wands.

Though yew has been used in small doses to treat rheumatic and urinary problems, its extreme toxicity makes it an unsafe medicinal plant.

Taxol inhibits cell division, and has thus been extensively researched for its use as an anticancer drug. Taxol is most commonly found in the Pacific yew (T. brevifolia), though some varieties of T. baccata also contain the substance. Studies have been conducted since the 1980s in search of potential cancer treatments.

Yew is extremely toxic. Do not take under any circumstances.